In the end we only had 10 days in Cambodia – we were a little bit gutted to see so little of it but we had come to the realisation that we were a bit “templed-out” and we were in danger of not having enough time (as odd as that might sound on a trip like this) for some of the stuff we really want to do in Thailand and Malaysia. We also decided we were overdue some crash-time on the beach so we headed to a group of islands just over the Thai border.

First couple of nights were in Koh Chang at Lonely Beach. KC is a bit of a resort island but Lonely Beach is the backpacker area – it’s not very lonely these days but it’s got a cracking beach and some decent bars.

We’d booked into a place called Oasis which is a collection of bungalows on hill, close enough to the action but far enough away that you can actually sleep at night (old git alert!). We got there after a long day of travelling and weren’t quite prepared for the 300m walk up a steep hill to get there – with the backpacks at the end of a long travel day it was the last thing we needed. Cross words may have been exchanged but forgotten after some much needed food and liquid refreshment.

There was one upside to the long day of travel though – we hit the most spectacular sunset on the ferry from the mainland. Here’s one of the photos but there are lots more in the Flickr album 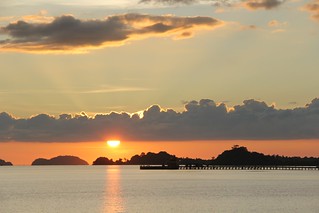 Once we got there we were so glad we did – the place was beautiful, chilled and had a fantastic crow’s nest / tree-house looking out over the bay and you go to sleep to the sound of geckos, cicadas and whatever else is lurking in the semi-jungle that makes up the inside of the island. 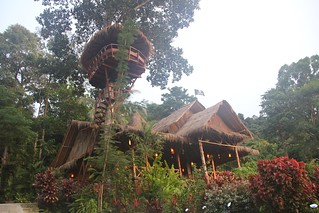 All through the trip, we’ve been booking places for one or two nights at a time – mainly ‘cos it gives us the freedom to move on if we don’t like the hotel or the area. Up until now this has worked really well – but for the first time we found ourselves somewhere we’d like to stay longer but couldn’t as they were full. It wasn’t the end of the world though as we’d heard that Koh Kood (sometimes spelled Koh Kut), the island next door was even more beautiful – very quiet but stunning beaches. It sounded ideal so we booked a few days at a hotel called Dusita and got the extortionate speedboat (THB900 – £18) over.

On the boat, they asked which hotel we were staying at. We assumed that was so they could arrange a “Sorng·taa·ou” (local taxis – basically a pick up truck with bench seating in the back!) when we arrived so we were surprised when the boat pulled into a picturesque crescent bay and dropped us off on the hotel’s private pier. Not bad for £30 a night 🙂 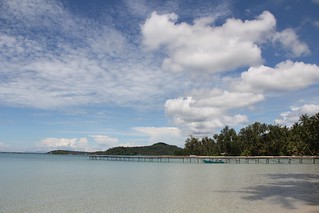 The guide books were right – there’s very little to do on the island other than chill out – so we did. Aside from one day where we hired a moped and explored the fishing port (fab lunch of freshly caught fish) and the waterfall in the middle of the lsland we did absolutely nothing other than sunbathe, swim and catch up with some books. Hotel was excellent and the food in the restaurant was, as you would expect, mostly Thai dishes with local fresh seafood.

It it was bliss and exactly what we needed. 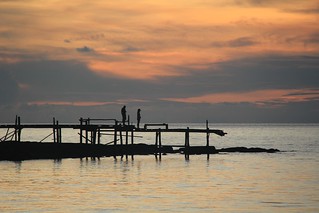