Continuing our tour of “Places north of Bangkok that used to be the capital of Thailand” we headed onto Sukhothai.

The travel contrasts continued with a 3 hour 1st class railway trip from Lopburi to Phitsanulok, a local bus (and the uncertainty that, despite the smiles and nods of the locals, we might not be on the right one) to Phitsanulok coach terminal to catch an hour long bus to Sukhothai.

To say it was old and decrepit is understating things – but with the windows open and it being a relatively short journey we just manned/womaned up and got on with it. Reminded me of what Greyhound buses in the US in the 50s must have been like.

Got to our hotel to find the air con was crap and the water wasn’t on in our “Deluxe” bungalow but at £10 a night you can’t really complain. Wandered into town and found that the restaurant that Lonely Planet raved about was deserted – found somewhere else to eat and got an early night ahead of the cycle tour the next day.

Sukhothai wasn’t winning any prizes at this point.

We’d booked into the hotel as it was near Cycling Sukhothai, run by Ronny – a Belgian Expat who’s been in the area for 20 years and his Thai wife Mem. We were missing the bikes at this point and wanted to get back on two wheels.

Turned out it was just Nikki and I booked on the trip so we picked up our mountain bikes at 8am and headed out with Mem guiding us through the local rice fields and back roads. She took is to some local businesses – not to get us to buy stuff, just to show us how the locals live and farm the land. The roads we were riding had been under flood water 3 or 4 days previously but were bone dry now and made for great riding. 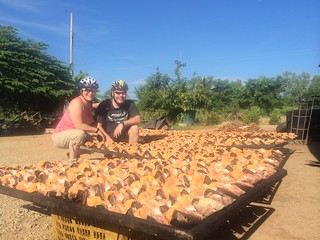 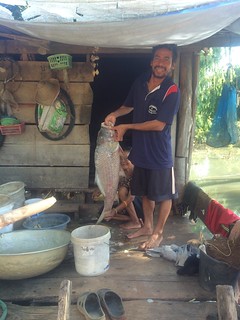 With the stop-offs, it took us about an hour to get from New Sukhothai (where we were staying) to Sukhothai Historical Park – where the 650 or so ruined temples are.

The time flew by quickly as we took in the stunning local scenery. As it was just us on the trip and we were stronger cyclists than most that do the tour, we got a few extra temples added into the package along with a few short stretches of cross country so we could put the MTBs through their paces. There’s a vicious rumour going round that I got cocky and stacked it whilst riding one handed filming video on the phone on one of them but that can’t possibly be true 🙂

The day was awesome. Continuing the list of screw ups, we’d managed to bring both the big camera and the Go-Pro out with no batteries but it didn’t matter – was just a joy to be out in such a beautiful historical part of the world with a knowledgeable, local guide that enjoys showing off her home. 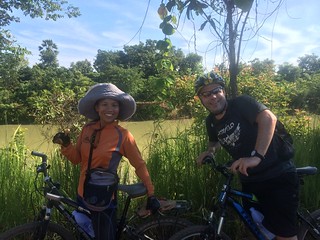 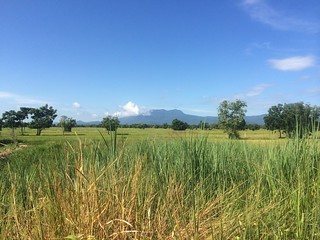 The temples and ruins are stunning and whilst the photos from the phone are good I really wish the big camera had been there to do them justice. Ah well – another lesson learned.

Despite all the little things that went wrong and the fact that New Sukothai is very unremarkable, if you’re touring this part of the world, I’d really recommend a visit just to see the historical park. And if you do it, do it with Cycling Sukhothai.

On now to Chiang Mai, Thailand’s second city. We plan to spend a bit of time there and tour out into the rest of the province.

One comment to “Sukhothai – back on two wheels again”