I wasn’t that sorry to leave Phnom Penh but I was sorry to leave the hostel we were in, and the people we had got to know there. So we decided to book into their sister hostel in Siem Reap, it had a pool and if the staff were just as friendly we couldn’t go wrong.

It was an uneventful bus journey, the roads weren’t great (mostly dirt roads and badly broken up tarmac) but we were told it wasn’t going to be pleasant. We arrived at the hostel after a long day and lets just say it didn’t live up to welcome we got at PP. We had booked for 2 nights but by 9.30 the next morning we had checked out and moved to a little B&B just down the road (no pool but cheaper than the hostel!!). The manager was a lovely guy called Ron from Ireland and Mike and his wife Samantha were the owners, it was the right move to change.

So we decided to try and salvage the day and hired some mountain bikes and decided we would head up to Angkor Wat for the sunset (cliché I know but it had to be done!). The temple was about 6km from the centre of SR and it was nice to be back on bikes again. The road was flat so it didn’t cause us too many problems. This would be the first of three days in which we would be a) on the bikes and b) at the temples.

The tourists aside, it was spectacular. 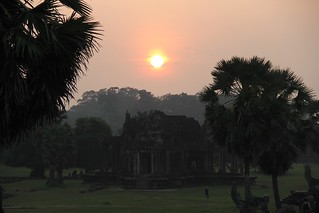 So on the Friday we had booked ourselves on a tour of the Angkor Wat temples with a tour company called Grasshopper Adventures.  There were 9 of us in the group which included a family of 3 daughters aged 8,10 & 12. I won’t lie, when we saw the girls arrive we were a little worried that the pace of the group would be painfully slow. We need not have worried, all three of the girls (Elizabeth, Faye & Lisa) were absolute superstars (Dutch, cycling is in the genes!) and rode so well. While the website says 30km for the ride we did nearer 40km, but it was worth it. Everyone raves about Angkor Wat but to be honest my favourite temple was in Angkor Thom (which is just north of Angkor Wat), called Bayon. It’s spectacular! 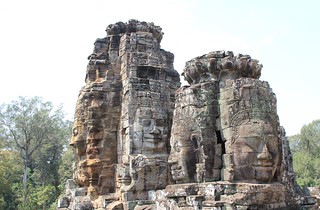 So the next day we hired the mountain bikes again and decided to head back and see the remainder of the temples that we hadn’t seen the day before and also to head back to Bayon as we really didn’t get as much time in there as we would have liked. The day wasn’t a sunny as we would have liked (which was probably a blessing in disguise) but it meant that the temples weren’t being shown off at their best. Even so we probably did somewhere near 50km riding that day. There is a hill near Angkor Wat which is meant to have the best views for sunset, but they only let around 350 people on the hill, so the plan was to time the ride so we ended up there with plenty of time so to bag ourselves a good spot. As we left Bayon, the sky looked grey and we both agreed that there would be no decent sunset and we were to try and get back to the hotel before the rain started. So we raced tuk tuks back the 10k from where we were and dropped the bikes off with about 5 min to spare before the heavens opened.

The next day was a “rest” day and we booked ourselves on to Cambodia’s version of Go Ape called Flight of the Gibbon. For the person that is petrified of heights, for some reason that was a must for me. It’s different to Go Ape as there are far less walk ways between each zipline. Suffice to say, my heart may have been in my mouth on more than a few occasions (mostly on the platforms rather than the zipline themselves) but I loved it!! 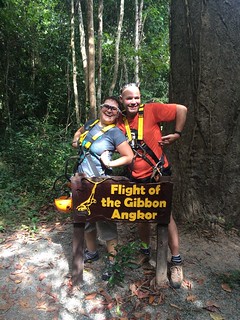 On our final day we were planning on getting up at 4.30am so we could go and watch the sunrise at Angkor Wat but when we hear the rain lashing it down outside, we decided against it and instead spent the day by the pool of a 5 star hotel not too far our hotel. Most of then big hotels that have pools let you use them at a cost of either $5/6. The only downside is that you pay twice as much for food and drink than you would normally do.

One thing we’ve tried to do whilst we’ve been travelling is to give back to the community where we can.  So when we read about a restaurant “that helps vulnerable young adults from orphanages” at the end of our street called Haven we had to go.  As we were early we managed to get a table, but usually you have to book at least a week in advance.  I can see why though, the food was amazing and the staff (the young adults) were attentive but not too much.

One of the other things we had to do, as we’d heard so much about it was go to a place called Phare or The Circus. The show we saw was called chills

The show was amazing, you could see the performers were not 100% polished at what they do but that’s the whole thing about the circus.  What they did have was plenty of passion which shone throughout the whole performance.  Gethin has never been very fond of the Cirque du Soleil but even he admitted it was very good. 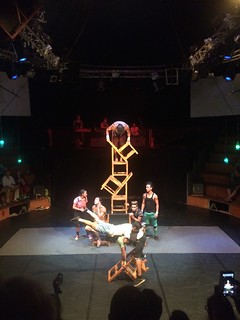 So after much deliberation we have decided to head back to Thailand and go for some proper beach time in Ko Chang & Ko Kut (Kood) instead of doing some beach time in Cambodia.

Messing about on ziplines at Flight of the Gibbon

Gethin does Flight of the Gibbon from The Pearsons on Vimeo.

Gethin & Nikki do 300m zipline at Flight of the Gibbon, Angkor Wat, Cambodia from The Pearsons on Vimeo.

One comment to “Siem Reap & the temples of Angkor Wat”