One thing we had both decided is that if there were hitch-hikers and they wanted a lift, as we were going there way we would take them.  Our first guy was called Victor, who was from Germany and had been on the road for about a year and had about 6 months left.  Our second was a young lady also from Germany but she only wanted to be taken about 10k down the road.  Our next visitors were two young girls (they were 20) who wanted a lift from the camp site at Milford Sound to Lake Marian so they could walk back the 3-4km to the camp site before they headed back to Queenstown.  Our last visitor was Raphael who was from Lisborn and was trying to get up to Wellington from Franz Josef Glacier, and had 3 days in which to do it in.  I do hope he made it as he had a flight to catch and was hitch-hiking all of the way up.

But I digress..  So we stopped in Queenstown Queenstown for 2 nights but long enough for us to try our hand at some mountain biking. You get to the top of the tracks via the gondola and the views are spectacular, and then the only way back down is via the tracks.  To be honest, I am still not 100% sure about mountain biking, I did enjoy the ride but the more I go “off road” the more I realise I prefer to be “on it”. 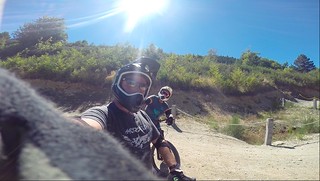 Prior to us leaving we were told that whilst in Queenstown we had to visitor a burger place called Fergburger buy Nicola and our travel agent.  The place is tiny and whilst it has seating for around 20 people it’s mainly a takeaway joint but the recommendations weren’t wrong when they said the burgers were amazing.  The queue outside every day, be it any time of the day was always long and that night was no exception.  Our waiting time was about 20 to be served then about 5-10 min before the food arrived.  It was worth it.

The next day we headed up the west side of Lake Wakatipu and visit Glenorchy and Kinloch.  The idea was to stay over night at Kinloch but whilst the view was stunning the wind wasn’t so much.  Instead we headed back on ourselves and stopped half way down the lake and stayed at a free camp site which was situated right on the lake.  The wind may have been up but we were sheltered enough to make it pleasant enough to sit outside.  The views were stunning and all we could hear that night were the waves crashing against the shoreline. 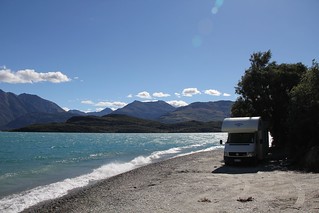 From there we pushed on to Wanaka via Arrowtown Arrowtown and stayed just outside of the centre in this fabulous holiday park.  We ended up staying 3 nights there only because Ludwig had got a slow puncture and it needed to be dealt with and none of the places we tried on the Saturday were open.  So we thought we would try something different activity wise and did an afternoon rafting on the river with our guide “Finn”.  It wasn’t quite white water but it was a lot of fun and Finn has been rafting up and down the river since circa 1991.

The Tuesday morning we set of early and pushed forward 286km north to Franz Josef Glacier.  Firstly we stopped at FJ’s little brother, Fox Glacier which is about 30 min drive south.  When we got to our camp site rain forest holiday park we tried to book on to Ice Explorer which took you inside the glacier but unfortunately it was booked up for the next 4 days and even the staff at the camp site were constantly checking the web site for us to see if anyone had dropped out, but alas it didn’t happen so the next day we had to do with the free stuff, but it was still worth it. 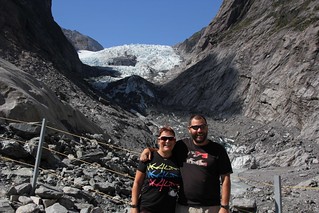 From here we decided we would be moving from the West side of the island to the East but the drive was too much for a single day and we broke it up by staying in Greymouth for the night before pushing on the next day as we wanted to get to Kaikoura so we could go Whale (and as it turned out Dusky dolphin) watching that afternoon. 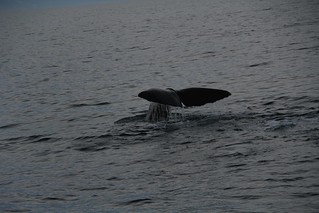 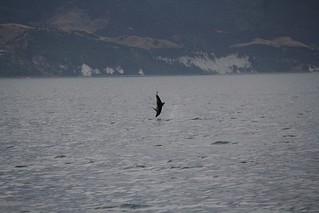 Our penultimate stop on the south island was going to be Blenheim, heart of the Marlborough wine region, well it would be rude not to considering we’ve done nearly every other wine region in both Australia and NZ!!!

Our first stop was at Villa Maria it’s a wine we can get readily in the UK but we love seeing what they have at the cellar door that we can’t usually get. Our favourite wine was a Research & Development wine they are doing, it was so good we went back for another bottle. Then the next day we hired some bicycles and did a small tour around Renwick which consisted of:
Seresin wines; Fromm winery; Framingham wines

Saying that our favourite new vineyard was Te Whare Ra wines we ended up going back the day after our visit to buy one of every one of their wines they had on tasting, it was that good.

On our way out of Renwick we stopped off at the Aviation Heritage museum in which Sir Peter Jackson has his collection of WW1 aircraft. It was pretty amazing.

Our last stop in the South Island was in Picton as it’s where we were due to catch the ferry the next day which would take us to Wellington.

I’m sorry to be leaving the South Island, it’s been beautiful and spectacular and I’ve loved every minute of it. The next 2 weeks or so will be in the North Island, it will be interesting to see if it’s as lovely as I remember it being back in 2006.