So our first week in Melbourne we did very little, we settled into Rachel & Iain’s place and just relaxed. We caught up with the Melbourne side of the clan, did a tour of the MCG (Melbourne Cricket Club) stadium hired a car and then headed along to Adelaide via the Great Ocean Road to tour some vineyards and watch some cycling (Tour Down Under for both the women and the men).

The day we picked the car up the weather was vile, it did nothing but rain all day, and although it wasn’t to the same standards as SE Asia it was a decent try. So we put off heading to Adelaide for a day hoped that the weather would at least be a little better when we set off the next day. The drive along the Great Ocean Road the weather was very mixed. It wasn’t overly warm, and the sun wasn’t out but it was wet (on occasions) and the wind was up, so we didn’t spend too long in either Torquay (Bells Beach) or Anglesea (Split Point Lighthouse) and made our way to Apollo Bay where we would be spending the night. Day 2 the weather was a little better (no where near as wet) so we stopped off at Cape Otway to see the lighthouse and at Port Campbell National Park to see the Twelve Apostles then we pushed on as we had a good 6 hour drive to get to Portland where we were spending our final night before making the final push to Adelaide. 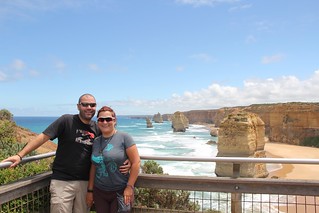 Our accommodation whilst in Adelaide was acquired from AirB&B which is basically people renting out their spare rooms via the wonders of the internet. Tony and his other half Cliona (he’s Aussie and she’s Irish) were our hosts and their house was lovely and only a short tram ride from the centre.

The Saturday, Sunday, Monday and Tuesday were mostly taken up with the Women’s cycling and the first stage of the Men’s tour. A good friend of ours back home runs a women’s cycling website so I did the photography and Gethin did interviews and a daily write up for her website. If you are at all interested here are the links for each stage.

The 2nd stage wasn’t being held until late in the afternoon so we took advantage of the spare time and headed 35km south (ish) of Adelaide and went wine tasting at McLaren Vale. Three of the vineyard we went to were recommendations from Tony & Cliona who are both into their wines. Our first stop was Samuels Gorge, it’s a small producer but the owner Justin MacNamee is a real character. He even has the same hair style as Side Show Bob from the Simpsons. The other vineyards we visited were Coriole, Kay Brothers (we came out with an awesome bottle of Tawny port) with our final stop at D’Arenberg. We are no strangers to D’Arenberg as we visited them in 2007 and we can get some of their stuff in the UK.  As I was driving I had to prize Gethin out of the vineyards so we could head back to Adelaide for racing that evening.

The Wednesday we said goodbye to our hosts and made our way about an hour up to road to the Barossa Valley where we were going to spend the next two day wine tasting. We arrived in the early afternoon so decided to visit a few vineyards that afternoon.  One of them Kaesler we visited when we were there in 2007 and had to go back and see if their Cabernet Sauvignon was still as good. It is.  The other two were Grant Burge & St Hallett the latter we can get from Waitrose at home but it’s always nice to try stuff you can only get from the cellar doors.  Whilst we were out at our final vineyard of the Château Tanunda (worst customer service we’ve ever had!) we saw two motor trikes doing wine tours Barossa Unique Tours.  When we got back to the hotel we spoke to them and managed to get an after tour set up for the next day which meant both of us could taste rather than just Gethin. 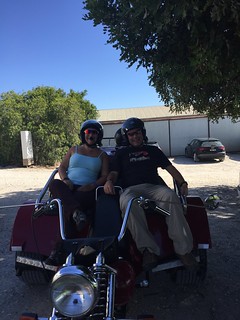 The main vineyard we wanted to do was Yalumba, we can get some of their stuff at home but since our last visit in 2007 I’ve been hooked on their desert wine which you can’t get in the UK.  We also visited Elderton Wines and a smaller vineyard which our tour guide John knew about Willows Vineyard.

We came back from Adelaide via the non scenic route and did the drive in the day (about 7 hours of driving).  Since we’ve been back in Melbourne we haven’t stopped.  Monday was Australia day so we spent it with Rachel, Iain, Camille, David (Rachel’s brother), Eliza (his wife), Claire (their 2 year old) and Eliza’s brother James and his other half Georgie.  It was a great day, loads of food and great company.  The Tuesday we spent the day at the Australian Open tennis and whilst we couldn’t get tickets for the main event (Andy Murray v Chris Kyrgios (the new Aussie sensation)) we watched it on the big screen with what was a pretty even split of Scots and Aussies.  Wednesday we took it easy and yesterday we went to watch the afternoon session of the Australian Track Nationals which are going on over the next few days.  We then spent the evening with Camille & Frazer (he is from Scotland but has lived in Oz for some time now), it was a lot of fun and very, very alcoholic.

Friday we were recovering from hangovers, packing and getting ready for the next leg of the journey, a near mid-night flight to Christchurch.  We have hired a campervan and that will be our home for the next 6 and a bit weeks.  I don’t know what the net connection will be like at the camp sites but we’ll try to blog as much as we can.