After Hanoi we headed south, wondering if the rest of Vietnam could live up to how much we’d enjoyed the north. Hue is a good 700km south and we decided to take the overnight sleeper train to get there. At about £30 each for an air-con sleeper berth the trains are a fantastic way to get around the country. 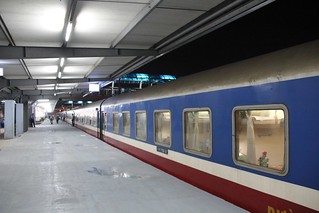 We arrived at Hanoi station and easily found our two beds in a 4 berth sleeper compartment, met our room mate, a Vietnamese businessman who spoke no English and went straight to sleep (whilst snoring heavily!) and then headed out into the corridor to chat to some fellow travellers. There’s only one train route out of Hanoi to the south and it goes through residential areas that have grown up next to the tracks. 10 mins into the journey the brakes got slammed on hard – we didn’t see anything but apparently the train hit a motorbike that had tried to jump a level crossing and (according to some of the locals) had lost a leg in the accident. We assumed the train would get cancelled whilst they cleared up the mess but 20 mins later we were on our way again.

In the morning we awoke to some beautiful countryside going through the former border between North & South Vietnam (otherwise known as the Demilitarized Zone – or DMZ) before arriving in Hue. This was the former capital of Vietnam from 1800 to the 1950s under dynasty of Emperors who were for the most part puppet rulers for the French regime that controlled most of modern day Vietnam, Laos and Cambodia. The citadel in the city housed the Emperor’s palace from those times and whilst it was mostly destroyed in wars with the French and Americans, they’ve made a really good effort to restore it to its former glory with help from UNESCO. Whilst it’s a work in progress you can really imagine what it would have been like in the days of the Emperors. 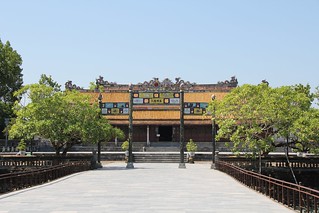 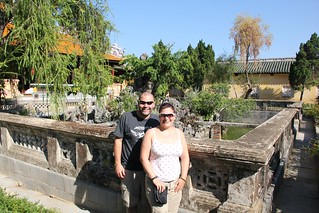 Next day we took a tour with Mr Trung, a former South Vietnamese soldier around the DMZ and the Vinh Moc tunnels. There’s not a lot left of the DMZ area that you can physically see so having a guide like him who knew the sites and could explain the history behind everything was crucial. The Vinh Moc tunnels were spectacular – a series of tunnels dug into the countryside during the American war to protect the North Vietnamese in the area from the American bombing and to support the arms supply line down the Ho Chi Minh Trail. They’re still intact and you can visit – seeing the conditions that people lived in for 5 years or more – whole families lived there and there was even a maternity ward where 17 babies were born during that period. The tunnels go down to over 30 meters underground and were dug by hand so as you can imagine it’s pretty impressive. 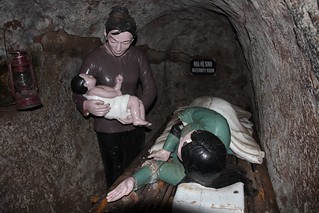 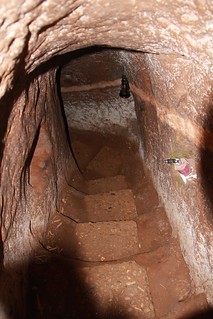 As for Hue itself we were really underwhelmed – the hotel we stayed in (Jade Hotel) was great but in the city you’re aggressively harassed by vendors, taxis, bar & restaurant staff. I don’t mind and expect a bit of that wherever we go but this was constant and made for a really unpleasant atmosphere. We were glad to be moving on and had heard great things about the next stop, Hoi An.

One comment to “Heading South: Hue and the DMZ”