The journey from Hue to Hoi An was a little under a 3 hour train journey which headed up through mountains and ran along the coastal areas. It was stunning to see and very strange to see the sea and beach as it’s something we hadn’t really seen since we started travelling.

The train drops you at Danang which is about 40 min drive north of Hoi An and you then get a taxi from there. To begin with we tend to only book 2 or 3 nights at a hotel until we know if we are going to enjoy the city then extend our stay – which is what we ended up doing here 2 days became 6. We had heard some very good things about Hoi An and wanted to use this time to chill and recharge the batteries.

Hoi An isn’t a large city and it’s very easy to walk around it which is what we tended to do most of the times. Our first day we took the chance to have a wander round the city and go looking for a food stall we had read about that we had to try. Banh Mi is basically a baguette sandwich, but this place was reviewed by the American chef Anthony Bourdain on his programme No Reservations and we had to go and see what all the fuss was about. OMG!! this was fabulous. The baguette is softer than we are used to in the UK but still as crispy and the fillings are just divine (there is no plain cheese and ham anywhere in sight).

The old city is fabulous at night, when it is lit up by lanterns and it just has this magical feel about it. 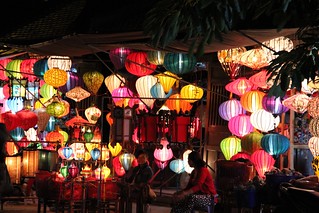 There is a river running through the old city, and on our last day in the town we went out for dinner by the river (this was nothing unusual) and although it rained whilst we were having dinner it rained enough to tip the river over the edge of street and up to the front of the restaurant, so much so we had to leave by a side entrance. 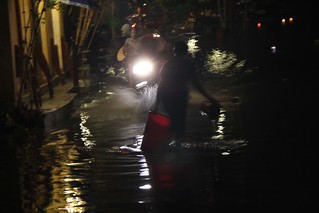 One thing the city is known for the amount of tailoring shops it has. Most of the shops offer outfits made to measure within 36 – 48 hours. I was given a recommendation for somewhere to go by Camille (a good friend from Oz) and she wasn’t wrong. I ended up getting 1 long and 2 short dresses made and all 3 are fabulous. Gethin was given the recommendation for a tailor called Mr Xe, we were told he is gay so don’t worry if he tries to feel you up (that’s exactly what we were told). He is a fabulous gentleman and Gethin got 2 shirts and a linen pair of trousers made, and told he has a fabulous arse!!!

Whilst reading up on Hoi An before we got there, I came across a rave review of a Street Food Tour run by Coconut Tours that takes you around the many street food stands in the city, showing you some hidden gems that most foreigners would never go to. This sounded right up my street so we dropped them an email and arranged to do the tour on our second day. We were met at the hotel at 1430 by the guy that runs the company, Phuoc, and taken straight to a place around the corner from the hotel.

OK – I’m open minded. I’ve always avoided snails in France as they didn’t appeal when I was younger but I couldn’t be seen to wuss out at the first hurdle – we were brought a bowl of snails that had been cooked and then marinaded in Lemongrass and Chilli. The end has been chopped off them and you suck them out of the shell. Absolutely gorgeous – consistency wise they were like mussels but obviously not as salty. We also had fermented pate wrapped in banana leaf and pig-skin salad. This might not sound too appealing but believe me they were all fantastic. 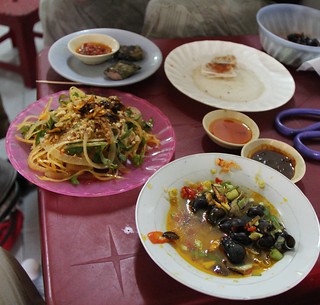 Over the next 4 hours we ate our way through 10 or 11 different stalls – highlights being the Bahn Mi that Nikki mentioned above, the Cao Lau (belly pork with noodles, herbs & crispy wonton), the Bahn Flan (Creme Caramel with a shot of strong black Vietnamese coffee poured over it) and the local favourite Com Ga (Chicken with rice and a sauce made from the chicken innards). The only thing we passed on was the Duck Foetus Egg – just really couldn’t stomach the thought of that. After 4.5 hours we were grateful for the taxi back to the hotel as we could barely walk!

We enjoyed the tour so much we joined Phuoc for a cooking school two days later. Starting in the market in the morning and then cycling out to his grandparents place in the village just outside town where all of the region’s veg and herbs are grown organically using kelp from the sea as fertiliser.

With two other couples (2 retired Parisiennes and a honeymooning Madrileños), Phuoc ran us through the local variation on spring rolls, fish marinaded in a local curry paste and cooked in banana leaves, Bahn Xeo (a local speciality – a cross between a pancake and an omelette) and a papaya salad. If you come and eat with us when we get back, expect to see some of this stuff getting served up 🙂 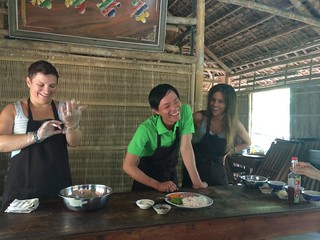 Also had some beach time

And I got told I had a fantastic arse by the gay tailor so all in all a good few days….!

One comment to “Hoi An: Food, tailors and lanterns”