When we originally planned this trip, the last thing I thought I’d be putting in the rucksack was a Breville Panini toaster.

Yeah, you read that right….

Our good friends Venus and Michael are now running the restaurant in the British Embassy in Bangkok and when we asked them if there was anything they missed from the UK that they wanted bringing over I was kind of expecting them to say “Marmalade” or “Marmite” – so the “sandwich toaster” response was a bit of a shock! Fortunately it fitted in the rucksack and they picked us up from the airport in Bangkok which meant it wasn’t any hassle to take it over with us. 🙂

We’ve had 4 days in Bangkok now and it’s been a gentle introduction to touring as we’ve had a great stay at Loy La Long Hotel by the Chao Praya river and in the middle of the bewildering mess of buildings that is China Town. 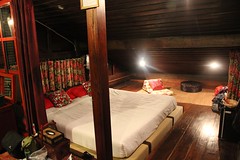 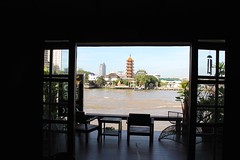 Massive thanks to V&M for showing us around and being fabulous hosts. We had an excellent day today – the Wat Pho temple with the 43 metre long reclining golden Buddha is truly breathtaking as is the whole temple complex that houses it. 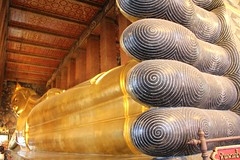 We then headed over to the British Embassy where Michael cooked lunch for us. For those that remember their place in Ealing, Michael’s cooking and especially his Lamb Curry is still absolutely stunning. No pics ‘cos security confiscated our phones before we could go in….

I guess the trip starts properly tomorrow as we get the train slightly north of Bangkok to Ayutthaya, a former capital of Bangkok and home to many ruined temples. Planning a couple of days there exploring the ruins by bike.

Our route takes us from there to Lokburi, Chiang Mai and Chiang Rai – before heading in to Laos.  there’s been flooding in the north of the country recently as it’s still the back end of the rainy season (and boy does it rain hard when it starts!) so hopefully we’ll be able to get to visit the places we’ve been hoping to go to.

One comment to “Unexpected Item in the Bagging Area”