After such a great time in Chiang Mai it was with a bit of sadness that we hit the road again. We’d found somewhere we were comfortable and we were heading off into areas we’d heard could be a little rough and ready. After an uneventful VIP bus up to Chiang Rai we checked into “Chat House” our first real backpacker hostel. Had a wander around a fairly unremarkable town before having a really nice Facetime catch up with Mum and Alex. Went to go out for dinner – but 5 mins down the road, the most torrential thunderstorm hit us – got drenched running back to the hotel and we just settled in there with some food and beers. 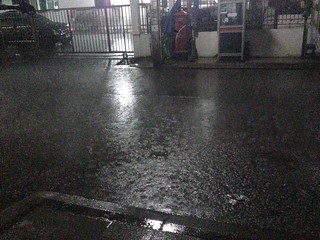 Next day we booked a tour guide that had been recommended to us by Lester, our old team mate from London Legion Ice Hockey who’d been in the area last month. The guide, Jermsak suggested a trip that saw some of the sights of the region before dropping us at Chiang Khong, the border town with Laos where we would pick up the slow boat to Luang Prabang.

First stops were Wat Rung Khun aka the White Temple and Baan Si Dum (The Black House). Both of these blew us away, beautiful in very different ways but both inspired by Gaudi’s theory that it’s possible to mix art, architecture and religion. Our photos don’t do them justice – these two really need to be seen in the flesh to understand the level of detail and work that’s gone into their creation

The rest of the trip took in some interesting but unremarkable sights:

We got to Chiang Khong in one piece and checked into our hotel – full of characters and with a great view over the river. We were going to stay there and chill out for the evening but after a facetime with Nikki’s sister Jo, we noticed that there was a bar called The Hub in town run by Alan Bate a Brit that holds the world record for cycling around the world – 18,000 miles in 106 days.

We had to meet this guy so we trekked up to the other end of town. Our hearts sank a little when it looked like a generic Brit Backpacker Bar but we went in anyway. Turns out that this place not only has its own cycling museum out the back with Alan’s extensive cycling memorabilia, but it’s kind of a clearing house for everyone that’s going to be on the Slow Boat the next day. A pretty alcoholic evening ensued – but I’ll let Nik explain a bit more about that 🙂

Chiang Khong is a small town which is now used as a stop over for tourists wanting to get the 2 day slow boat down the Mekong river into Loas and Luang Prebang.

The hotel was basic but Don (he is Southern American but him and his wife run the place) was more than happy to chat and impart his wisdom and knowledge on us.

Alan (the owner of the Hub Bar) is the most amazing man I’ve ever met. He is so laid back and down to earth about what he’s done but both Gethin and I were very honoured to have been shown the collection of bikes and race jerseys he has in the upstairs of the bar and the garage adjacent to it.
So the Brits (“most” under the age of 30) we met in the bar that night were also going to be on the slow boat the next day and it was at that point that I felt really old!!

So the next morning we were picked up from the hotel, dropped off at the broader crossing.  We went though immigration and whilst waiting for the coach that would take us to the boat the rest of the gang showed up.  Most of the them were quiet (we left them drinking and I forget what time most of them said they left the bar!) but I knew that wouldn’t last, as the plan that was formulated the night before was to drink their way through the 7hr boat trip to the over night stop, and that they did.

The boat isn’t like the ferry’s you get from Dover to Calais, it’s a long boat.  It holds around 50 people, that includes bags and motorbikes.  There is very little to do on the journey apart from drink (soft or beer the choice is yours), sleep and watch the world go by.  We were lucky on day 1 of the trip as the weather was lovely, so this made the trip very pleasant as you get a lovely breeze coming in from the river as the boat moves up stream. 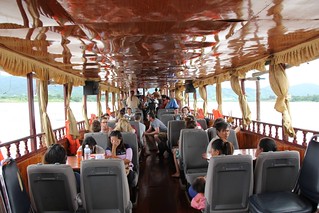 The little village you stay in over night is nothing to write home about, we found a comfortable hotel and prepared ourselves for day 2 on the boat.  Our boat for the second leg of the trip was older, there were no tables and the seats were in rows of twos.  As I mentioned early the weather makes a difference to the journey.  Day 2’s weather was wet, very wet!!  Instead of glass windows the boat has plastic covers that come down over the windows till the rain has stopped enough that you can put them back up again.  The plastic covers for this boat were a dark blue, unlike the clear plastic of the first boat.  So we were not only plunged into darkness but it also meant there was no air circulating through the boat which turned it into a moving sauna.  Luckily the rain eased off for some of the journey but I think everyone made the most of the quiet and darkness and caught up on some extra sleep.  Drink was still drunk but not to the same extent.

The worst thing about the boat is the scam that is played at the end of the journey.  The boat docks about 8km outside of Luang Prabang and you have to get off and get a taxi to the centre.  Don had warned us about this and said there would be “Westerners” that would request that the boat be taken into Luang Prabang and we have 4 of them on our boat.  After what felt like forever, we got off the boat and went to get the taxi’s.  We left the 4 of them on the boat, but as we were getting into our tuk tuk we saw them walking up from the boat.